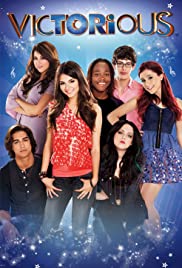 Victorious is an American sitcom created by Dan Schneider that originally aired on Nickelodeon from March 27, 2010 until February 2, 2013. The series revolves around aspiring singer Tori Vega, a teenager who attends a performing arts high school called Hollywood Arts High School, after taking her older sister Trina's place in a showcase while getting into screwball situations on a daily basis. On her first day at Hollywood Arts, she meets Andre Harris, Robbie Shapiro, Rex Powers, Jade West, Cat Valentine, and Beck Oliver. The series premiered on March 27, 2010 after the 2010 Kids' Choice Awards. The first soundtrack for the series, Victorious, was released on August 2, 2011. The series won for Favorite TV Show award at the 2012 Kids' Choice Awards and 2013 Kids' Choice Awards, even beating out iCarly. Victorious has had four Emmy nominations. Its second soundtrack, Victorious 2.0, was released on June 5, 2012. On August 10, 2012, Victoria Justice stated that the series would not be renewed. Justice also said that Victorious was the number one show on Nick and she did not know why it was cancelled. Dan Schneider added in a blog post that Nickelodeon often ends shows after about 60 episodes. Even though he and the cast would have been willing to shoot more episodes, the network decided to end the series. He also denied rumors that Victorious is ending because of its new spin-off show, Sam & Cat. Although the Victorious cast only filmed three seasons, when the series was cancelled, Nickelodeon split the third season in half, making a fourth season. The third and final soundtrack was released on November 6, 2012 and entitled Victorious 3.0. The first single from the new soundtrack is called "L.A. Boyz" and the music video was released on October 18, 2012. The series finale "Victori-Yes" aired on February 2, 2013.